Skip to content
New This is a test message

2023 year is the 200-year BICENTENNIAL for the county of Yates and YCSO will be a part of it. In 1823 when the county was founded there were two New York State constitutional offices created first in the county government. The County Sheriff and the County Clerk. Thus, from the very beginning YCSO was a major part. Yates County did not have a jail in 1823 so Sheriff James P. Robinson (from Middlesex) had to transport any inmate to be housed in the Ontario County Jail at Canandaigua, NY. Our first county court house built in 1824 had six cells and it burned to the ground in 1834 suspected to have been caused by an inmate. The county then built a new courthouse (still standing today housing the Legislature). The new jail was a separate building located near where the flagpoles are today on Liberty St. That too burned down via fire set by an inmate in jail for Arson, and a new jail was built in 1857 on same spot. Then a jail and Sheriff’s Office was built in 1904 at the corner of Liberty and Court St. The present Yates County Public Safety Building at 227 Main Street across from the courtyard park started construction in 1975 on the site of the Wagner Inn became the home of the county jail and Sheriff’s Office in 1977, and is still there today.

To commemorate the county history and our part therein I herewith issue new Bicentennial uniform badges (see below) for most full-time uniform members that regularly interact with the community and public to wear with pride for this 2023 Bicentennial year. 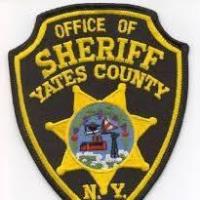